The 2014 Black Friday is fast approaching and in fact, a number of retailer companies including Target and Best Buy are already starting to give consumers a glance of some of their big offers for that special day. Here's what to expect from Microsoft on this year's big shopping day.

Microsoft has just joined these retailer firms, as the software giant unveiled plenty of details about their upcoming Black Friday sales. 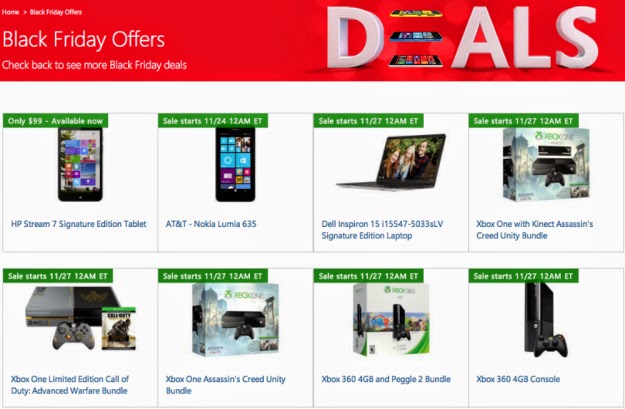 Microsoft has made its Black Friday offers announcement early this week, highlighting special deals schemed for the forthcoming shopping spree. Among these product offers include some interesting Xbox One bundles, plus plenty of standalone games, Windows Phones, tablets, and laptops.

The only thing that Microsoft has yet to announce are the prices, as the company did not provide the list on their Black Friday Offers page on their website so far.

Here's an initial rundown of some of the most interesting sales offers from Microsoft for this year's Black Friday.


Microsoft's Black Friday sales online will be available to buyers beginning 12:00AM on the 27th of November, 2014.