By untu di November 04, 2014
Oindrila Interviews RV Raman - with the rapid development of today's technology we must enrich our knowledge of gadgets, because every day there are many new gadgets that are made with advantages, in blogs Stephanie News we will meriview many gadgets from various brands ranging from the specification and its price .. Now we will discuss first about Oindrila Interviews RV Raman please see our explanation to finish:

Last week, I reviewed Fraudster, the first corporate thriller written by RV Raman. Today, I am pleased to showcase this budding writer on my blog! I asked him a few questions and he took me a little deeper into his world with his answers. Here's a glimpse of our exchange:- 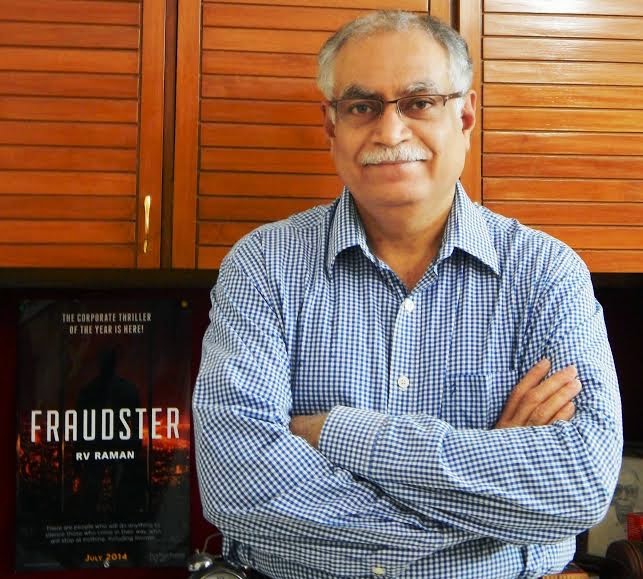 Oindrila: What made you want to write a thriller after so many years in the corporate world?
Raman: I guess it was the desire to do something different, something other than regular work. When I was approaching 50, I decided that I wanted to write and teach.
I began my writing hobby with epic fantasy, but soon realised that the US market for it is very small. So, I tried my hand at crime fiction aimed at the US reader. I will continue writing both genres.
Oindrila: What struggles did you face while writing your novel? How did you overcome them?
Raman: While I wouldn’t call it a struggle, the primary challenge was about striking balances on several fronts:
• The plot must be exciting, yet credible. I didn’t want it to be too fantastic or too mundane.
• How much of plot development v/s how much of character building? Especially when I needed multiple characters for credibly painting an industry-wide scam, and I didn’t want to exceed a certain word limit.
• What kind of language do I use? Closer to the literary end of the spectrum, or the simpler end? Some choices are mutually exclusive.
• How do I make it appealing to the seasoned business executive as well as the common reader? What each looks for is different. Each one’s understanding of corporate New York is different. How much do I explain? Familiarity with financial matters vary widely. This issue has been reiterated in reader feedback. While a couple of readers have found it difficult to follow, a couple have said that I’ve explained too much.
Oindrila: How long did it take you to write Fraudster? Were you in a full time job while you wrote it?
Raman: The first draft took four months, but the book underwent considerable changes after that, as friends gave feedback and suggestions. Overall, it took the better part of a year.
Oindrila: How easy/difficult is it to find a publisher for your first book. How did you go about it?
Raman: There were two issues here. First, which were the publishers I wanted to work with? Second, which of them had space for me – a new writer in a sub-genre (corporate thriller) that was yet to see volumes? All we could do was approach them and hope for the best. I’m glad Hachette thought it worthwhile to work with me.
Oindrila: How does it feel now to be a published writer?
Raman: Honestly, it feels no different. In my mind, having the first book published is but the first step. What is important is how readers receive it. If it is received well, it then becomes a question of my ability to write more such books. Only after a few books, and only when he builds a respectable readership, does a writer consider himself established. There is a long way to go for me.
Oindrila: Which are your favourite books?
Raman: The genres I like best are crime fiction, SFF (Science Fiction & Fantasy) and humour. Sherlock Holmes, Poirot and Father Brown mysteries are the ones I like the best in detective fiction. The Day of the Jackal, The Odessa File, Sphere and Congo were excellent thrillers. In SFF, it is Asimov’s Foundation/Robot Series and Tolkien’s Lord of the Rings. In humour, anything Wodehouse.
Oindrila: Your favourite author?
Raman: It is impossible to name one author, as they are so different from each other. I like Arthur Conan Doyle, Agatha Christie, Edgar Wallace & GK Chesterton in mysteries, Michael Crichton & Frederick Forsyth in thrillers, and Tolkien & Asimov in SFF. And in humour, there is only one - Wodehouse.
Oindrila: Any plans for a second novel?
Raman: Another corporate thriller is now underway. It is set in the US stock market.

we feel the information Oindrila Interviews RV Raman that's all.

hopefully the information Oindrila Interviews RV Raman that we have conveyed can provide benefits for you and all visitors of this blog, if any criticism and suggestions please comment.
you just read Oindrila Interviews RV Raman if this article is considered useful and you want to bookmark and share it please use the link https://stephaniefulke.blogspot.com/2014/11/oindrila-interviews-rv-raman.html and what if you want other information look for another page in this blog.